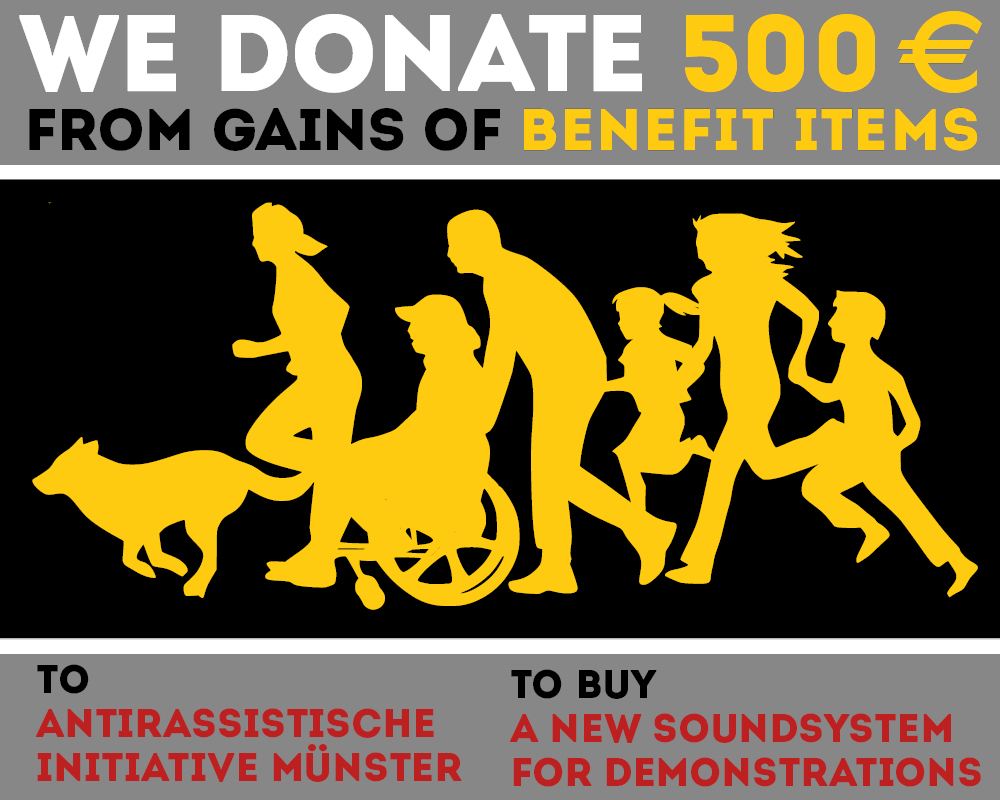 In the last months we were selling lots of dozens of our “Refugees welcome”-items with the result that 500 EUR could be donated to the Antirassistische Initiative Münster (AIM), a local antiracist initiative. This donation allows the AIM to buy a sound system, which can be used for demonstrations against fascism, borders and the racist system in its entirety. An essential point in their self-conception is that every person should have the possibility to live and move where he*she wishes to.

Its been a while since we prsented our new products here. Especially in the last weeks we’ve listed a few new products we want to present you here. Just in is a sweatshirt (yes, not a hoody!) with everyones favourite print “Vegan means I don’t eat, wear or exploit animals” – and this time the colors are not as bright:

Also new and in the store since a few weeks – these three t-shirts as well as the raccoon t-shirt. Its a misprint, so its a bit cheaper, but you probably wouldn’t notice. And we also have a new shoe! The Canada Sneaker!!! A very soft and comforable vegan show from Vegetarian Shoes .

And now for something completely different. For sure some of you were annoyed that its really easy to pee standing up for some, while its kinda difficult for others. Especially on the road or at festivals, when the toilets seem to be a bit of a biohazard. But with Freelax
you’ll no longer have a problem! 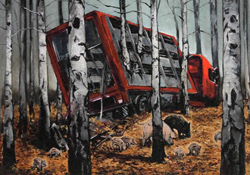 Two postcards by one of our favourite artists – Hartmut Kiewert.

The documentary Der Prozess about the trial against animal rights activists in Austria.

Yummy savoury spreads from Hempwood and from the ecovillage Sieben Linden.

And for all friends of scrambled tofu – Kala Namak salt for that eggy taste or for the Scrambled Tofu seasoning mix.

Last, but not least: If you’re thinking about feeding you cat or dog vegan, but you’re not sure if they’ll like the food, you can now order sample packs of Ami Cat and Dog. For dogs we now have Benevo chewing strips.

On March 2nd 2011, it will be for one straight year that 13 Austrian animal rights activists, organized in the „Basisgruppe Tierrechte (Bat)“ and other animal rights and animal welfare groups, are having to defend themselves in court for animal rights related activities criminalized under §278a of the Austrian penal code! Having been involuntarily in court for more than 70 times in 12 consecutive months, one can only imagine the severe effects of state repression on the accused! Considering the gruelling and absurd strategy of both state attorney Wolfgang Handler and judge Sonja Arleth, it doesn‘t need much to picture the overwhelming presence of the trial and the backbreaking routine of having to attend court 3 times a week!
When, more than two years ago, the raids of the activists‘ houses on May 21st 2008 revealed the massive dimension of surveillance and observation by police forces, the lives of everybody accused dramatically changed once and for all. During and after being held in custody for 3 months, it was because of acts of solidarity that the accused were able to cope with these attacks of the state. This shows the importance of an active solidarity movement! Touch one- touch all!

To this very day, the accused activists themselves cannot emphasize enough the importance and positive value of pictures, photos and drawings sent by people from all over the world! Visual acts of solidarity and active protest proved to play a major role in giving strength and persistence to the activists.

We want to continue passing on that strength and endurance to the Austrian activists! At the anniversary of the beginning of the court case, this seems especially important! We, thus, call for another round of the open display of solidarity! We want all of you to support our action: „Pictures of Solidarity“! We want your pictures! No matter in what form: Draw, paint, spray-paint, handicraft, film or shoot photos of your very own acts of compassion and solidarity! Portray your thoughts or deeds of action! Make your own video if you can! The sky is the limit.

All too often there is a certain feeling of helplessness. All too often a clear sign of solidarity seems very difficult. Of course, a lot of people have sent in reports of protest before and have made a donation. But it often seems difficult to display real signs of solidarity and connection without being locally present. So sending in your „Pictures of Solidarity“ is an answer to this feeling of powerlessness and a real good opportunity for showing support and encouragement!

To sum it up: Please send your „Pictures of Solidarity“ to antirep278a@riseup.net by February 28th 2011 (please upload your digital files/photos, e.g. to www.imageshack.com and then send us the link. Please don’t send files as email attachment). We will publish all incoming works on our website from March 3rd onwards.

So please forward this call for action and place our web banner on your homepage. You‘ll find the banner here, on our Homepage: http://antirep278a.blogsport.de/material/
For further information on the trial see: .