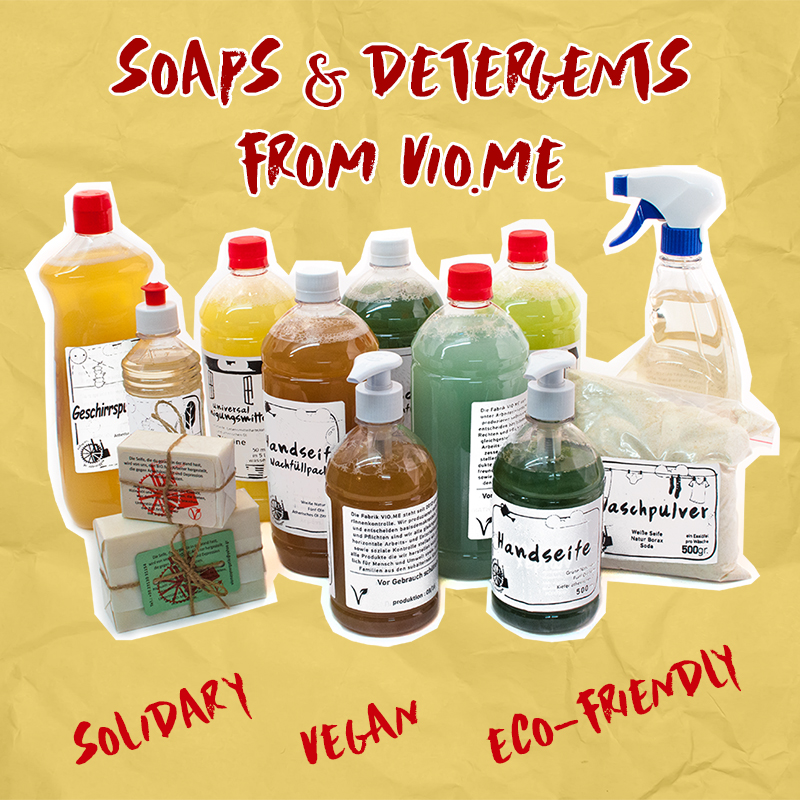 We are very pleased to present you a new collection of soaps und cleaning supplies! They are from VIO.ME from Greece: a factory being occupied in 2011 and driven by autonomous workers since 2013. They produce cleaning supplies and soaps for the movement against capitalism.

In 2011 the factory was left by the former owning family and back wages were not paid. So from May 2011 on the workers didn’t receive their salaries anymore and decided to occupy the factory which from then on is driven by self-goverment and the rule of equal rights. In 2013 they got back to the grindstone and resumed the work. But instead of producing building materials, from now on they fabricate cleaning supplies and soaps as ecological as possible and with fair standards.

For sure, they encounter much resistance for that venture but they also get a plenty of solidarity within and outside the country. Today VIO.ME is one of the symbols of the struggle for dignity and a prime example of squatters against capitalism in the crisis-ridden Greece.

However, it is still too early to declare the end of what has been the crisis in this factory in recent years. VIO.ME is far from out of the woods yet: the former owners are back and made demand to liquidate the business regardless of their behavior in the past like f.i. the unpaid wages of its workforce.

VIO.ME needs your support! Please feel free to visit their blog. Lend an ear to their solidarity calls and buy their products as an act against capitalism.