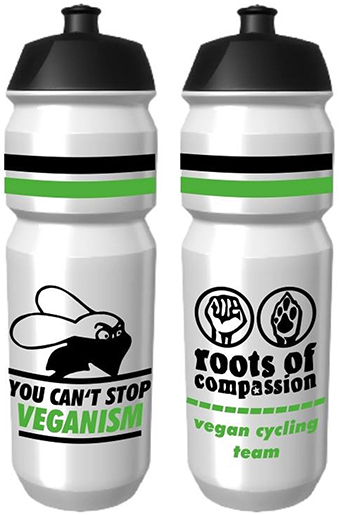 It’s been a while since you’ve heard from us. All the more we have some news for you.

The only thing to complete your vegan cycling-luck is a drinking bottle? And our Klean Kanteen Stainless Steel Bottle won’t fit into your bike’s bottle holder? Then weep no more, because here it is: the roots of compassion vegan cycling team drinking bottle made of bioplastics, dishwasher safe, BPA- and phthalate-free.

They sow the wind and reap the … carrots? That’s right! A german newspaper wrote about the Vegan Army Fraction in 2014. Such a thing didn’t exist – until now! 😉 And there are some more stickers and buttons: 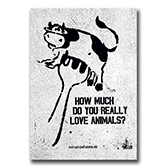 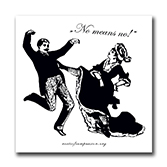 Cowspiracy: The Sustainability Secret is a groundbreaking feature-length environmental documentary following filmmaker Kip Andersen as he uncovers one of the most destructive industries we’re facing today: animal agriculture. As Andersen approaches leaders in the environmental movement, he increasingly uncovers what appears to be an intentional refusal to discuss the issue of animal agriculture, while industry whistleblowers and watchdogs warn him of the risks to his freedom and even his life if he dares to persist.

The new Animal Liberation Front Supporters Group Newsletter is here, featuring an article about SOCPA 7, a worldwide overview on actions for animals (November 2013-October 2014) and, of course, letters from prisoners. 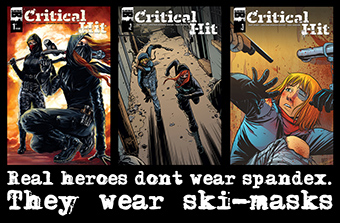 Wow, we were really stunned by the enormous demand for animal liberation comics! So we just had no choice but to include not only the Liberator series but also the new Critical Hit comics by Matt Miner in our shop. The plot revolves around anti-hunting actions in the course of which the activists themselves come into the firing line …

Last but not least we also got some bodily delights for you. No, not what you’re thinking about right now, you little pervs. Or maybe you were actually thinking about food? Anyway, we expanded our vegan meat selection. Now in stock: Vegourmet Piece of Ham style and Rauchwurzen style!
Also new: HanFu “Apple-Leek”, a vegan hemp-based spread high in omega-3 and omega-6 fatty acids (ratio 1:3) and protein.

As regards the sweets, tasty new wine gums found their way into our shop: Veggie Berries and Veggie Fruits. Of course free from gelatine and fair trade!

Due to higher prime costs we had to raise some prices, especially items we get from overseas. This hurts, because we like to sell things we like at lowest prices possible (if we have to sell them anyway, that is). We hope you can forgive us and who knows, maybe some day we can announce a price drop (or the falls of capitalism).