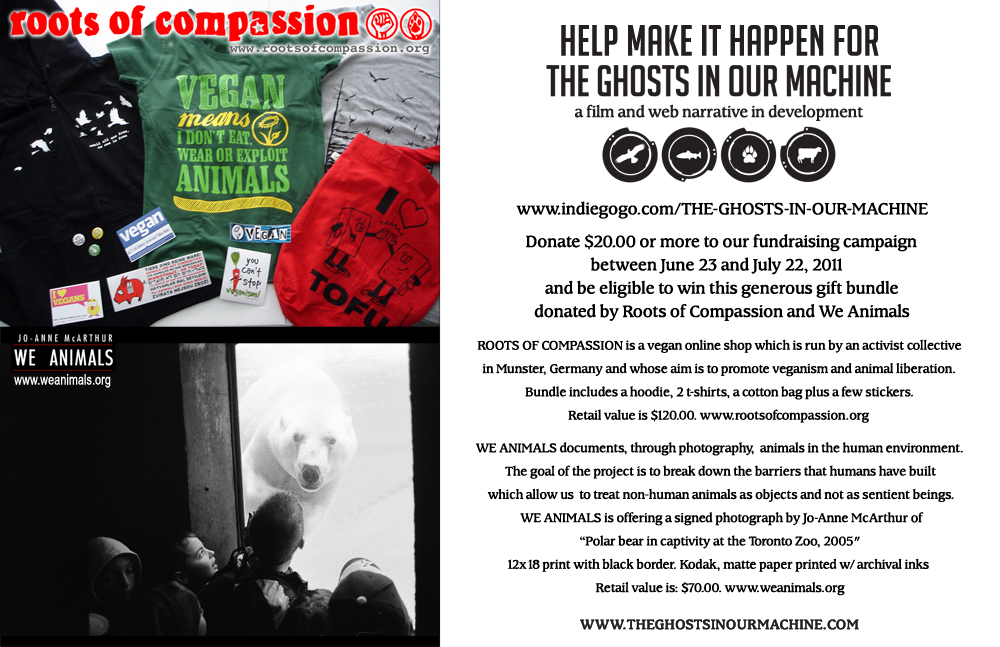 Liz Marshall, well-known filmmaker and director of the award-winning documentary ‘Water on the Table’ aims to shed light on the lives of those animals who are exploited for the sake of human profit and consumption: THE GHOSTS IN OUR MACHINE is a cross-platform project and will unfold itself as a multimedia media narrative experience: As a documentary film, as an interactive website experience and through a variety of social media channels. The ‘Ghosts team’ also includes animal photographer and activist Jo-Anne McArthur of We Animals.

We proudly announce that we will support the ongoing fundraising campaign to secure funding for the next phase of producing THE GHOSTS IN OUR MACHINE by providing a ‘roots of compassion bundle’. If you donate a minimum of 20$ through the (you must indicate your name!), you are eligible to win a great roots of compassion bundle, including a hoodie, two shirts, a cotton bag plus buttons and stickers. As if this weren’t enough, the winner will also receive a beautiful signed photograph by Jo-Anne McArthur! Depending on the size of your contribution there are loads of further incentives for every donation! So please support this project by spreading the word and making a generous contribution. Like the project on Facebook, join the newsletter list and follow them on Twitter and YouTube. For the ghosts!

We recently had the chance to ask Liz some questions about what we think is a  beautiful project that has the potential to awaken many people and shift their perspectives on our relationship with animals powerfully.

RoC: Hi Liz! First of all we want to let you know how much we love your project ‘THE GHOSTS IN OUT MACHINE’ (TGIOM) and that we feel honored to support the ongoing fundraising campaign. You are widely known for picking up on diverse social and environmental issues with your work. How did you come across the issues of animal exploitation and what has motivated you to reveal them through TGIOM?

Liz: Thanks for your support. It is heart warming to be building such a strong international network at this early stage. I first came across the issue of animal exploitation 23 years ago when I read Diet for a New America by John Robbins. It opened my eyes and I immediately became vegan. My veganism eventually slackened and I became vegetarian. And then over the years my commitment to vegetarianism slipped up a few times. I would rationalize these inconsistencies in a variety of ways. But now the thought of eating animals makes me feel sick and sad. I think I have insight into why so many animal lovers grapple with and come to terms with this issue in stages. It’s complex. Hopefully my own experience will aid THE GHOSTS IN OUR MACHINE in attracting a wider audience. We, the Ghosts team, are ultimately very committed to helping consumers lessen their impact on animals and our aim is to facilitate many “AHA” realizations for people about the plight of animals used for human profit and consumption.

My body of work (since 1994) primarily focuses on human rights issues, but I have become equally committed to environmental justice and the plight of animals. As a filmmaker I am passionate about giving a voice to the underdog (pun intended); shining a light on that which is underrepresented. Because the animal rights movement is so marginalized and so often dismissed, even by many types of activists, I am fully aware of the challenges in doing this project. We are determined to engage a mainstream audience because we believe that (in the words of Maude Barlow) “the rights of animals is the next frontier”. So despite the obstacles I feel inspired and energized to pour myself into this project day by day, to make it a reality and to help contribute to social change. If TGIOM can be part of the ripple effect towards greater consciousness about the ways we take from animals and cause such suffering, we will have achieved something. We want to open hearts.

RoC: You defined TGIOM as a “cross platform” project. Can you further explain this concept and tell us what kind of web features we can expect to appear in the following months? How can people can people become involved with the unfolding narrative process?

Liz: TGIOM will be a multi media narrative experience that lives out over the next several years across multiple platforms as a documentary film, a central website experience, social media channels and as sister offshoots. All of this will allow for an interactive multi layered living story that attracts, fosters and sustains community engagement. Central to the narrative are the ghosts themselves: the animals living in the shadows of our highly mechanized urban world. It will be a journey into their sentience. I want to cinematically express that the ghosts in our machine have souls. Are animals property to be used and owned? Or are they sentient beings deserving of rights? This is the overarching question and it will be posed in various ways and forms throughout the lifecycle of the project. People are already involved in the unfolding narrative  — our facebook page is an active vibrant space, it’s so cool to see it grow and to interact with people every day about the issues and the project. It gives me hope! These are such compassionate empathic people. Once our newly branded and conceptualized website experience is up and strong (in a few months – TBA), there will be several ways for people to interact and play an important role in the project as we enter production for the documentary. Between now and then I encourage people to join our facebook page and follow us on twitter and share videos with us on vimoe and youtube. Essentially, engage in the social media realm with us and join the dialogue. Spread the word. In the next months we will reveal several surprises including a slew of new Animal Ambassadors and a few new Ghost Stories. We will also occasionally facilitate a Ghosts Veg Challenge for individuals who want help going vegetarian or vegan.

RoC: I really like the title ‘The Ghosts In Our Machine’ because it gives significance to two fundamental aspects of animal exploitation in our societies: For one thing it makes clear that the ongoing process of animal exploitation is systematically concealed from people. For another thing the term ‘machine’ symbolizes our economic system which – in focusing merely on growth and profit making – lacks one of the most crucial human qualities: respect for other beings’ interests and feelings. From your point of view, how is the exploitation of animals for the sake of human profit linked to other exploitative mechanisms that characterize our capitalist system? Do you aim to point out any of these parallels in TGIOM?

Liz: It is all connected. Corporate globalization is the machine and the ghosts are the billions of animals bred, raised, used and slaughtered around the world for human profit. It is a staggering reality and animal industries do everything to keep us in the dark. The ghosts are the cogs behind the closed doors of these haunted environments. I just read somewhere that these animal industries represent the highest concentration of suffering on the planet. The title lends itself to a lot of symbolism. And as you say there are many other examples of ghosts in the machine of our modern world – such as the millions of sweatshop workers working around the clock in huge factories in developing countries, producing mass quantities of brand name and generic cheap goods for our bottomless consumption. The movement to go local is one that I believe in and try to support.

RoC: Do you have a target date for the documentary and are there any plans for screening TGIOM internationally?

Our target date for the premiere of the documentary is early 2013. That must sound like an awfully long time to wait for a project we are talking about now, but remember this is a cross platform documentary which means there will be many stories and layers revealed leading up to the release of the film, and beyond. We will peel back the layers over time. The documentary will take time to film in Canada, the US and Europe, and post production always takes time. The documentary film is a special part of the ecosystem of the project as a whole. We will want the film to be seen all over the world via film festivals, as a theatrical release, at the grassroots, in the educational sector, and for retail. The distribution phase will be as exciting as our current development phase and our production phase to be.

RoC: Tell us more about the ongoing fundraising contest! Are there any other ways in which people in Europe can support TGIOM?

Thanks so much. We launched an online fundraising campaign exactly one month ago and we have one month to go. It is a transparent process, this link takes you to a page which explains more about the project and what we need the money for ($12,000). We have already raised over $6,000.

To mark the last half of our campaign we are doing a fun contest. Roots of Compassion is instrumental along with We Animals (www.weanimals.org) in helping us. Together they are donating vegan products and a powerful photograph. Anyone who donates $20 or more to our campaign between now and July 22nd is eligible to win this generous gift bundle. And if you make a  donation you will see that you are eligible for all kinds of other perks.

RoC: Thanks for sharing your ideas and thoughts on this awesome project. Best of luck with the next phase of development and we’ll keep up the support. For the Ghosts!

Manage Cookie Consent
We use cookies to offer you an optimal experience. The necessary ones are essential for your visit. We use other cookies in order to be able to produce anonymized statistics. Others mainly serve marketing purposes.
Manage options Manage third parties Manage vendors Read more about these purposes
Show settings
{title} {title} {title}